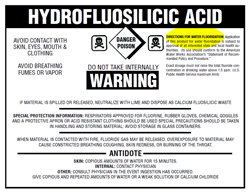 Fluoride has been added to drinking water since the 1960s. Currently, approximately 70% of the U.S. population is exposed to fluoride added to their drinking water for the purposes of improving dental health. This is done because it has been believed that fluoride strengthens teeth.

New evidence shows that the entire belief that fluoride strengthens teeth was perpetrated by the founder of one of the largest U.S. aluminum manufacturing companies. These types of companies, along with manufacturers of certain types of fertilizer produce large amounts of fluoride (considered a toxic substance in this form) as a by product. This toxic by product had to be specially disposed of. This process of disposal costs large amounts of money for these industries that produce it.

It has been well known for years that fluoride in this form damages bones, can cause certain types of cancer, and actually makes teeth more brittle. It also dramatically increases aluminum uptake to the brain which has been associated–along with mercury–with Alzheimer’s disease.

Should I be concerned about the use of fluoride?

If the ADA recommends fluoride, it must be good . . . NOT.

In an effort to present both sides of this issue, we welcome you to read “The Fluoride Debate.”

The Fluoride Debate, is a juxtaposition of the arguments presented by the American Dental Association (ADA) withcomments from many of the independent scientists who have examined the issue with an open mind.

There are several important documentaries that have been produced about fluoride.  Please visit our Media Library to browse through the fluoride videos.  We would especially like to highlight “Fluoridegate” and “The Great Culling.” 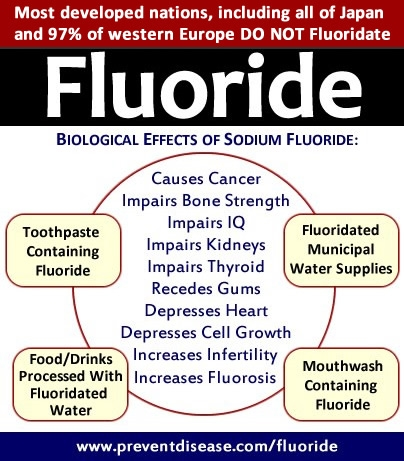 Fluorosis is a cosmetic condition that affects the teeth. It is caused by overexposure to fluoride during the first eight years of life. This is the time when most permanent teeth are being formed. 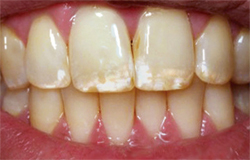 After the teeth come in, the teeth of those affected by fluorosis may appear mildly discolored. For instance, there may be lacy white markings that only dentists can detect. In more severe cases, however, the teeth may have:

Fluorosis first attracted attention in the early 20th century. Researchers were surprised by the high prevalence of what was called “Colorado Brown Stain” on the teeth of native-born residents of Colorado Springs. The stains were caused by high levels of fluoride in the local water supply. People with these stains also had an unusually high resistance to dental cavities. This sparked a movement to introduce fluoride into public water supplies at a level that could prevent cavities but without causing fluorosis.

Since the 1930s, dentists have rated the severity of fluorosis using the following categories:

Fluorosis affects nearly one in every four Americans ages 6 to 49. It’s most prevalent in those ages 12 to 15. The vast majority of cases are mild, and only about 2% are considered “moderate.” Less than 1% of cases are “severe.” The prevalence of fluorosis in children ages 12 to 15, however, has increased since the mid-1980s.

Although fluorosis is not a disease, its effects can be psychologically distressing and difficult to treat. Parental vigilance can play an important role in preventing fluorosis.

So what causes fluorosis? Ingesting fluoride is the cause of fluorosis. Sources of fluoride in the body include the following:

How can you prevent fluorosis?

Parental vigilence is the key to preventing fluorosis. Parents can minimize children’s exposure to fluoride by:

Contact your dentist if you notice that your child’s teeth have white streaks or spots or if you observe one or more discolored teeth. In many cases, fluorosis is so mild that no treatment is needed. Or, it may only affect the back teeth where it can’t be seen.

The appearance of teeth affected by moderate-to-severe fluorosis can be significantly improved by a variety of techniques. Most of them are aimed at masking the stains. Such techniques may include:

We will never share your email address with anyone!